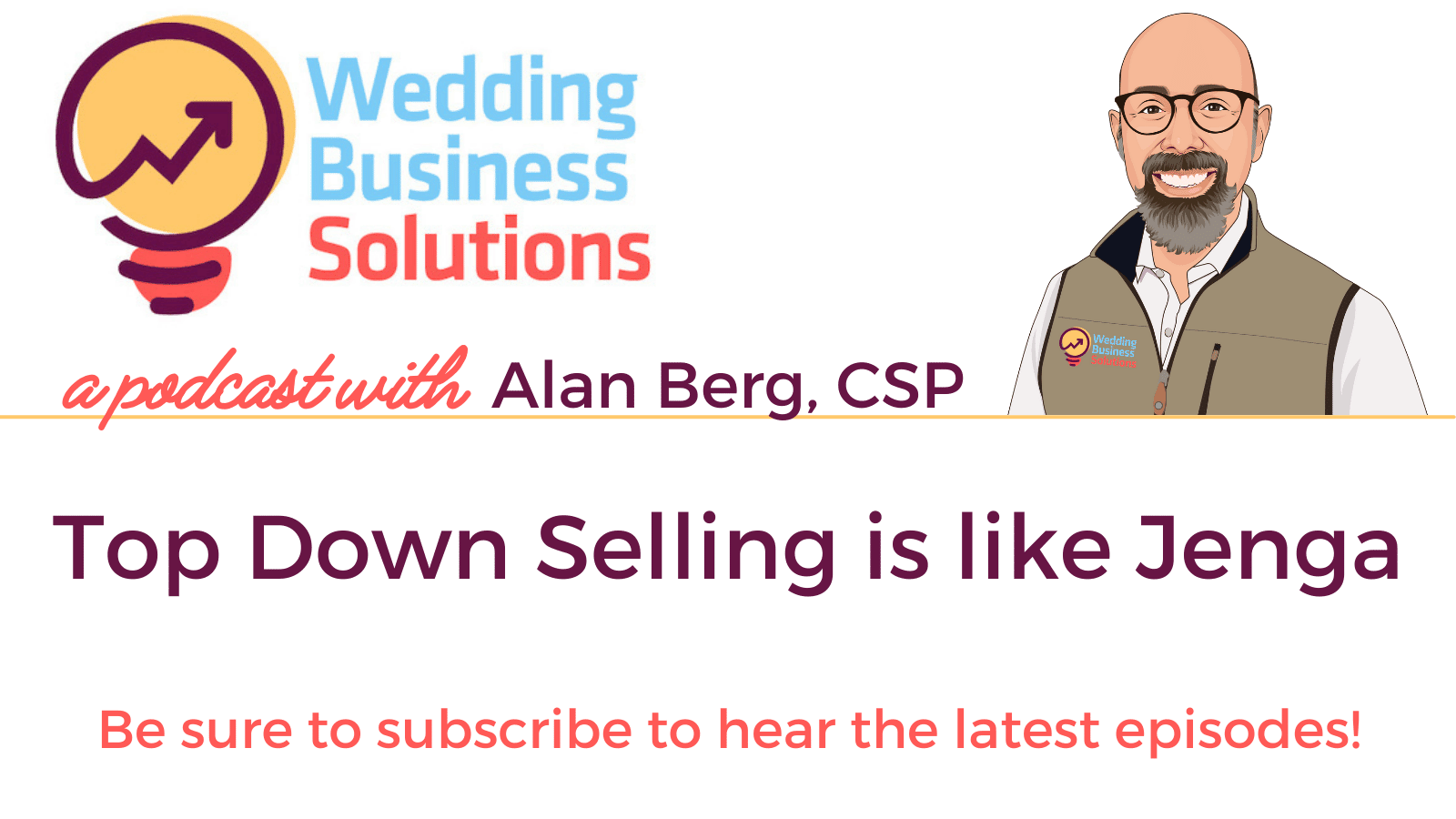 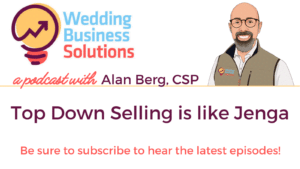 What can a game with wooden blocks teach us about how to sell more and profit more? It’s a great parallel, with each block representing a product or service you offer. I’ve used this analogy many times on webinars and in trainings and people, like you, always tell me that it makes Top-Down Selling much clearer. Listen to this 9-minute episode and find out how you can sell more via Jenga!

Listen to this and all episodes on Apple Podcast, YouTube or your favorite app/site:

Below is a full transcript. If you have any questions about anything in this, or any of my podcasts, or have a suggestion for a topic or guest, please reach out directly to me at Alan@WeddingBusinessSolutions.com or contact me via text, use the short form on this page, or call 732.422.6362

Please be sure to subscribe to this podcast and leave a review (thanks, it really does make a difference). If you want to get notifications of new episodes and upcoming workshops and webinars, you can sign up at www.ConnectWithAlanBerg.com

– How can the game Jenga help you sell more and profit more? Well, I call it Top-Down selling and I use the game Jenga for explaining on how that works. Listen to this episode and find out.

– Hi, it’s Alan Berg and welcome to the Wedding Business Solutions podcast. Today, I want to play a little game with you. The game is called “Jenga”. Most of you are familiar with the game Jenga where you have those blocks and you build them up into a little tower and then you have to start taking blocks away and not have it fall down, right? You don’t want to be the one that it falls down on. And I’m going to show you how Jenga can teach us about Top-Down selling.

Top-Down selling is not selling someone the cheapest thing you have and then trying to add more things on. That’s bottom-up selling. Top-Down selling is finding out the results that your customer wants, presenting them with a package of services and products that will give them the results that they want. And then asking for the sale, regardless of what their budget is. And then if it’s too much, you can start taking things away and working from the Top Down as opposed to trying to sell them more things in the bottom up. Now, this is different than upselling. Upselling means the sale has been made and now you’re going to try to sell them more things. And I think that’s still a good idea to do it. Especially since the statistics show that couples go over their budgets by 30% to 40%. So if they have tried to keep to their budget when they bought from you but then later the budget’s already blown, maybe they’ll add on that other thing that they said No to in the beginning, maybe they’ll add it.

They also might come into some more money where sometimes a friend or relative might say, hey, listen you don’t need more towels. So instead of more towels or whatever, is there something else that I can do? And they might say, hey, we’re thinking about a photo booth. You know, maybe if you’d want to do that and maybe they’ll do the photo booth. And then they weren’t going to pay for it before but now they can do that. So there are various reasons. So Top-Down selling based on Jenga. Think about each of the blocks of Jenga as a product or a service or something that you sell. And I already had another episode talking about packages versus a-la-carte. But a-la-carte would be each block is its own thing, trying to build it together. A package is already groups of those services there.

The idea of Top-Down selling is similar to if you’ve ever seen the TV show, “Property Brothers”. And for those of you that don’t know the show, it’s the two hosts of the show are twin brothers. One of them is a real estate agent and one of them is a contractor. And people come to them looking to buy a house. The contractor and the real estate agent, they take their list of wants and needs and whatever for their house, and the budget that they say, and they find them a house. So then you’ll see in a future scene of that show the couple is walking through the house and they’re looking around and it’s everything that they want. It’s everything on their list. It’s amazing, it’s got things they didn’t even know that they wanted on the list, it’s fantastic. And then they’ll find them in the house and they’ll say, hey, so what do you think? And they’d be like, oh, this is great. It’s in the neighborhood we want. It’s the size lot that we want. It’s got the right number of bedrooms and bathrooms and game rooms and whatever it is that they want. It’s close to transportation, close to the schools. It’s whatever, all the things they want.

So they’ll say so how much do you think this is? And whatever the budget that the couple gave to these guys is, it’s always way more. Not a little bit more like way more like 50, 60, 70, 80%, double, right? It’s so much more than their budget. And it’s amazing because people are always surprised and the shows are always like that. So I don’t know why they’re so surprised. I guess they’ve never seen the show to be on the show. So the idea then is, well, it’s more than your budget but if you want this house that’s what it costs. So if they say, well, it’s too much. Now the question is what are the things we’re going to change? So with Jenga if you’re watching the video, I have a little Jenga in front of me here. If we change the neighborhood, but we keep this size house and so forth, that’s like taking a block away. And if we maybe go with one less bedroom or one less bathroom, that’s like taking another block away. And just like with the game Jenga, when you take things away, you end up with holes in that Jenga. And if the Jenga is still standing, when they say Yes, you have a sale. And that sale is bigger than selling from the bottom up, which was like selling the one block because you’ve sold them this whole tower. Yeah, it’s got some holes in it but you sold them the tower.

If it falls it means you can’t satisfy the results they want and their budget. And you’re not a good fit. And this is when we often run into people that have, what do they say, they have a champagne taste on a beer budget. Well, some people understand when they buy beer, they get beer. Some people don’t understand that and they still want champagne. And that’s when you get an unsatisfied customer. Because they paid for beer, they got beer and they wanted champagne. They didn’t get it and they’re going to complain about that. So that’s when it’s not a good fit.

So with Top-Down selling when you’re taking stuff away, if they’re not satisfied with both the price and what they’re getting, the Jenga falls. And when that Jenga falls it just means it wasn’t a good fit. Your company is not the right fit. And that’s when you say to them, you know what? It doesn’t seem like we can satisfy the results that you want us to do and the price that you need to get to. So I don’t think we’re going to be the right fit and you refer them to somebody else. Or they come back and say, no, but I want what you do. And you say, well, this is the price. And it’s not your job to lower your price to meet their budget. It’s your job to provide them with the results that only you can provide and then charge them the price that you’re going to charge to get them there. Because if they want your results they have to hire you and pay your price.

So Top-Down selling by Jenga is, again, picture that Jenga. If you’re not watching video here, just picture a Jenga and then picture if you said to them this is what you’ve asked for. These are the results you want. And then if they say it’s too much, that’s when you start taking blocks away. And as long as it doesn’t fall when they say Yes, you have a sale, very often bigger than the sale you would have gotten if you sold from the bottom up and tried to add on and add on and add on an add on. Because people get fatigued with that. They don’t want adding more on. And that’s another reason why packages work so well because a package is not like individual blocks now. It’s groups of blocks and it’s easier to put that tower together for them using the groups of blocks.

Top-Down selling is about finding the results they want, presenting them with something that will give them those results, asking the price that you would charge to get to those results. And if they say yes, take the sale. If they say, no, it’s too much, it’s not your job to lower the price without taking things away. Your job if you lower the price is to take things away so that they’re feeling the pain with you. Yes, I’m getting less money but you’re also getting less products and services. And if they don’t want less products and services, they have to pay the higher price. It’s okay for them to ask. You don’t have to do it. You don’t have to lower your price without taking anything back. That’s giving away profit. I’ve spoken about that in many, many episodes and in my books and in my speaking, in my consulting. Every dollar you lower your price without taking something back in value is profit you gave away. Stop giving away your profit. Start selling more, start profiting more. If you do Top Down selling, you should profit more from each and every event. On average, you’ll profit more doing the same number of events, you’ll end up profiting more. And that my friends is a big bonus for you

I’m Alan Berg. Thanks for listening. If you have any questions about this or if you’d like to suggest other topics for “The Wedding Business Solutions Podcast” please let me know. My email is Alan@WeddingBusinessSolutions.com. Look forward to seeing you on the next episode. Thanks.

Listen to this and all episodes on Apple Podcast, YouTube or your favorite app/site: 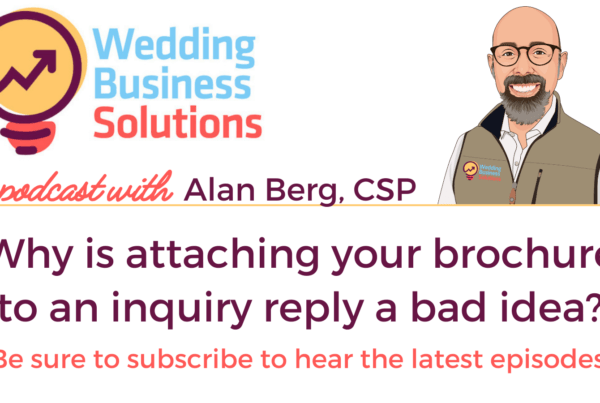 Podcast Transcript – Why is attaching your brochure to an inquiry reply a bad idea?

Alan | Blog | No Comments
Podcast Transcript - Why is attaching your brochure to an inquiry reply a bad idea? You get a new inquiry. You want to reply quickly and get them some information.… 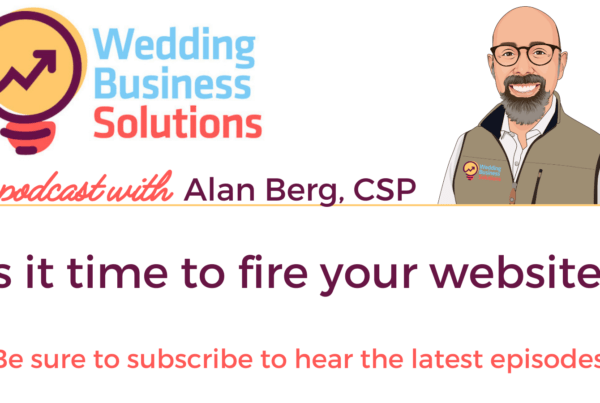 Podcast Transcript – Is it time to fire your website?

Alan | Blog | No Comments
Podcast Transcript - Is it time to fire your website? We all know that our websites are an important part of our marketing and branding. They’re waiting, 24/7/365 for someone… 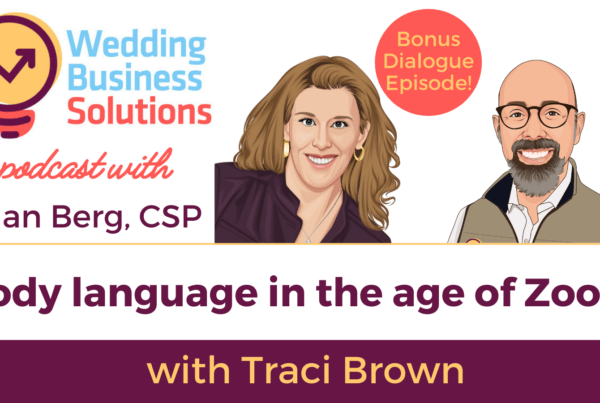 Alan | Blog | No Comments
Traci Brown - Body language in the age of Zoom – Bonus Dialogue Episode I’ve often referred wedding and event pros, like you, to Traci Brown and her books/courses on… 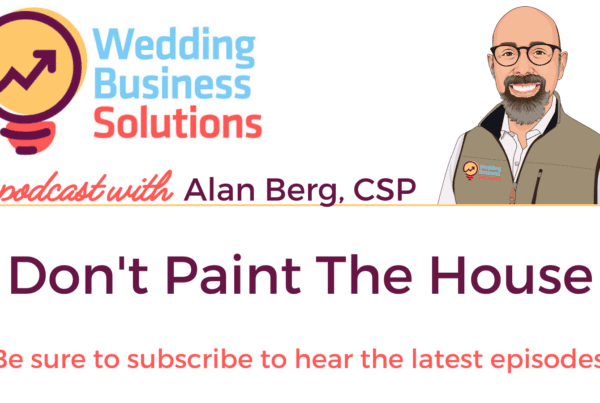 Alan | Blog | No Comments
Podcast Transcript - Don't Paint The House I know, it’s a strange title for a podcast episode on a platform called Wedding Business Solutions. This is actually a true story…

Want to stay up to date on where I’m speaking and get my latest articles, hot off the presses? Click the button to join my list (I won’t sell your info or spam you… promise!)